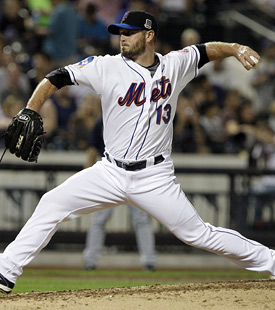 By Jon Lane
In case you haven’t heard – how was life on Jupiter? – it’s Yankees vs. Red Sox this weekend. Stay with YESNetwork.com all weekend for the latest from Fenway Park.

Many believe a three-game sweep would be a knockout punch to the Red Sox and their division title homes. A 9 ˝-game deficit would be virtually insurmountable. It’s never over until … you know … but I truly think the Yankees are too talented and disciplined to pull a 2006 Mets, 1995 Angels or 1964 Phillies and blow this thing.

Speaking of the Mets – I’ll leave the folks from Flushing to deal with the latest Gary Sheffield mess – Billy Wagner made his return to the Majors Thursday night. He looked great, perfect in fact, hitting 96 MPH on the gun and whiffing two in the Mets’ 3-2 loss to the Braves. Not too shabby in his first big-league appearance coming off Tommy John surgery.

How much longer Wagner will remain a Met is the next question. Wagner today was claimed on waivers, reports SI.com’s Jon Heyman, which leaves the Mets three days to work out a deal with the claiming team. Francisco Rodriguez is the closer and the Mets have no intention on picking up Wagner’s $10 million club option for next year.

Prior to Heyman’s story I had a thought: Yankeeland.

Right now the Yankees have one left-hander in their bullpen, Phil Coke, and there will be two if Damaso Marte is actually activated. But does anyone actually trust Marte in a big spot? In any spot? And as well as Coke has pitched this year, how much pressure do you think his young shoulders will handle facing David Ortiz or Jacoby Ellsbury in the ALCS? Or for that matter, Curtis Granderson, Josh Hamilton or Bobby Abreu in October pressure situations?

Enter Wagner, and before you start going So Taguchi on me, remember that the only Sandman in the Bronx is Mariano Rivera. That means the final fate of the game won’t be on Wagner’s repaired left shoulder. He’ll give Coke and Phil Hughes a blow. He’ll face one or two hitters in big spots, and he’ll work against lefties or righties (Wagner has held right-handed hitters to a .186 lifetime average).

Moreover, you get a fresh arm, albeit one you handle with care, but one with loaded bullets.

Brian Cashman has more than a week to evaluate. There’s little to complain about the Yankees these days (though to some complaining is the spice of life). But Wagner, despite the 10.38 ERA he compiled in the 2006 postseason, is your standard low-risk, high-reward investment. The Mets won’t ask for the world in prospects, only some help in Steinbrenner dollars. That’s a good deal.

There’s more than one big series this weekend. The Rangers, trailing the Red Sox by a game in the Wild Card race, are in St. Petersburg for a critical three-game set with the Rays. If the Yankees and Rangers are able to take their respective series, it’s a tremendous boost to the men in pinstripes. The Rays’ postseason hopes would take a dive straight towards South Beach while the Red Sox would be buried in the division race and out of the playoff picture, but not out cold. Beginning with the Rays and continuing next week in the Bronx, the Rangers will play 15 of his next 19 games on the road.

The sun is shining in wonderful Stamford, CT, the home of the YES Network’s studio. I was really starting to think that New York had inherited Seattle’s weather pattern. What a brutal month this has been for both weather in New York and for the baseball teams that reside here. How appropriate that they are both ending June by playing each other in the last weekend series.

The Yankees will finally check out the Mets new digs. I’m going for the first time on Saturday to get some interviews with some players and hopefully chat with both managers. I know that Jerry Manuel has to be pleased, that even though his team is not playing its’ best baseball, they are still only one game back of the Phillies in the division. The Mets have suffered some major injuries this season that would cripple any contender into the cellar, however, they have endured and continue to compete. Even though they have won their last three out of four, they are only 9-13 in the month of June and this series with the Yankees might give them an opportunity to leave this month unscathed after getting swept by the Pirates to start June. The other teams in the NL East continue to struggle giving the Mets the golden opportunity to stay in the race, while some of their main cogs try and get healthy.

The Yankees are five games back of the Red Sox, who seem to have had a stranglehold on the Yankees and the AL East since the meltdown of 2004. Now I know the Rays won the division last season, but it just feels like the Red Sox get all of the breaks the Yankees used to get before the 2004 ALCS. The Yankees need to figure out a way to beat those guys in the second half of the season or else it’s going to be another long offseason for the team’s fans and especially the team itself.

This weekend series is more than just a regular Subway Series for the Yankees; they need this series to make a push and finish out their first half on a high note. Let’s hope for sunnier days after the All-Star break.

According to Chad Ford of ESPN.com, the Nets and Orlando Magic have agreed to
a trade that would send Vince Carter to the Magic. The official deal is Carter and
Ryan Anderson for Rafer Alston, Tony Battie and Courtney Lee. Orlando
would add Carter to an already star-studded lineup that would include
Dwight Howard, Rashard Lewis and Jameer Nelson, while Hedo Turkoglu is
most likely going to opt out of his contract this summer. The Nets are
trying to be big players in the big free agent market next summer, when
all of the big names seem to be free agents at the same time. The Nets
are going to be well under the cap with this move.

Shaquille O’Neal will be 38 years old next season and has one more opportunity to win a championship by teaming up with LeBron James. The Suns and Cavs have agreed on a trade that would send Shaq-daddy to Cleveland. My question is, when is Nike going to make a Shaq puppet. This should be interesting to see how Shaq and LeBron play together.

Literally my pick was wasted on Geovany Soto this season. I thought I was getting a stud catcher and in his second major league season, he is turning out to be a dud. I’m happy that I traded for Victor Martinez, but Soto has been a huge disappointment. Now word is that he has failed a drug test administered by the International Baseball Federation for marijuana use during the World Baseball Classic. Thanks Geovany!

Can you believe the decade is almost over?

I want to put together a poll here on YESNetwork.com about the best and worst moments of the decade in New York and National Sports. I don’t know about anyone else, but this decade flew by. Give me a shout on twitter, https://twitter.com/JoeAuriemmaNYY, or comment on here if you like the idea and I’ll start to come up with some moments.

Every Tuesday, YES Blog takes the pulse of New York on the hottest topics being talked about right now in the world of sports. What’s your take on the below issues?

How many innings will Chien-Ming Wang pitch tonight?(survey software)

How many games will the Yankees win this weekend at Citi Field against the Mets?(polls)

Who will start at first base in the All-Star game for the American League?(answers)

Who should the Knicks take with the 8th pick in Thursday’s NBA Draft?(polling)

Which current division leader is least likely to win the division?(surveys)

How many starts will CC Sabathia miss with his biceps injury?(trends)

Who is to blame for the over-coverage of the Brett Favre situation?(poll)